Our customer wanted to reduce the carbon footprint of his property between York and Selby. He had a keen interest in environmental issues and was concerned about rising energy prices. His cottage was over 400 years old so he had structural and aesthetic concerns about installing solar panels on the roof. We therefore worked with him to design and install a ground-mounted solar PV array at the bottom of his garden. 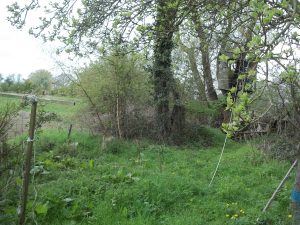 We sought planning permission from the Local Authority for a ground-mounted solar PV array. We decided to position it near the boundary of the property when it would not be shaded by trees.

We needed to dig a trench to run a cable from the solar array to the house - a distance of about 60m. We used a turf cutter and then a small digger to remove enough earth so that the cable could be buried around 80cm deep. When we had half-filled the trench, we buried a "Cable Below" warning tape to reduce the chances of future excavations damaging the cable. This photo shows the trench just before we buried the cable.

We decided to lay concrete foundations for the solar array. We dug four parallel ditches and laid an aggregate base within wooden shutters to contain the concrete whilst it set. The photo below shows the compacter we used to level the base and the weed control membrane we laid.

We chose to use Schott 240w solar panels for this installation as they are more robust than most panels on the market. Importantly in our case, they are certificated as resistant to ammonia which we thought might be used in fertilisers on nearby farmland. We installed these on the Renusol Trisole mounting system in two rows of eight facing due south for maximum yield. 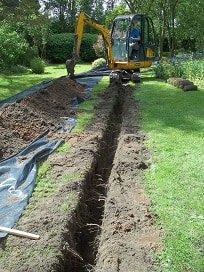 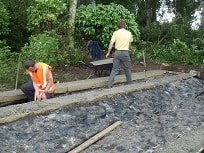 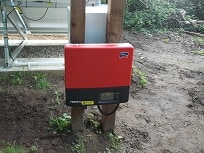